Eric Stanley started his Thursday afternoon school visit to Mary Munford Elementary high-fiving seated students while the remaining students entered the auditorium. From the first notes he played on his violin the 400 or so students were captivated. Using recorded loops, Eric connected with the students by incorporating several nursery rhymes into his performance.

At one point Eric asked if there were any dancers in the audience. Of the 30 raised hands he selected a young boy to come up on stage and show off his moves. You could tell it was a moment the youngster had been waiting for as he busted some impressive moves while Eric played. Once done Eric congratulated the student on having a big heart and the courage to get up and be himself in front of his fellow students. 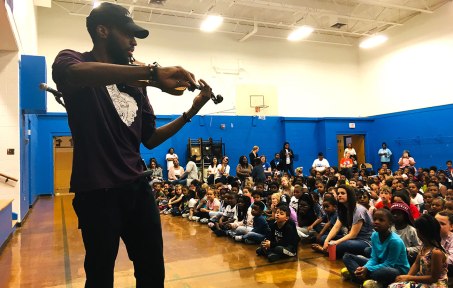 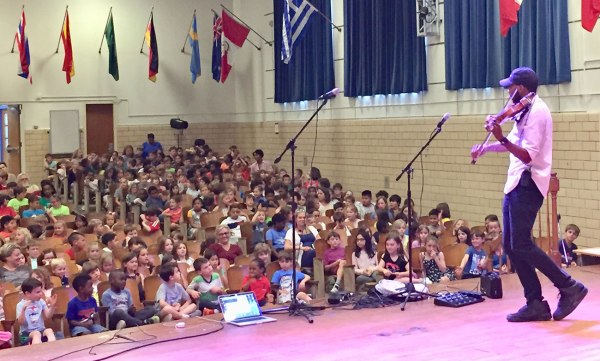 Friday morning Eric visited with about 300 students at Chimborazo Elementary in Church Hill. Once again he connected immediately with the students and this time invited two to perform with him – one singing and the other dancing while Eric played. The collected students gave all an enthusiastic round of applause.

As he does at every school he plays, Eric encouraged the students to always be who they are and to stay inspired. The kids were off to a good start after seeing Eric’s performances.