JAMinc is excited to announce the first In Your Ear Concert of the new decade! 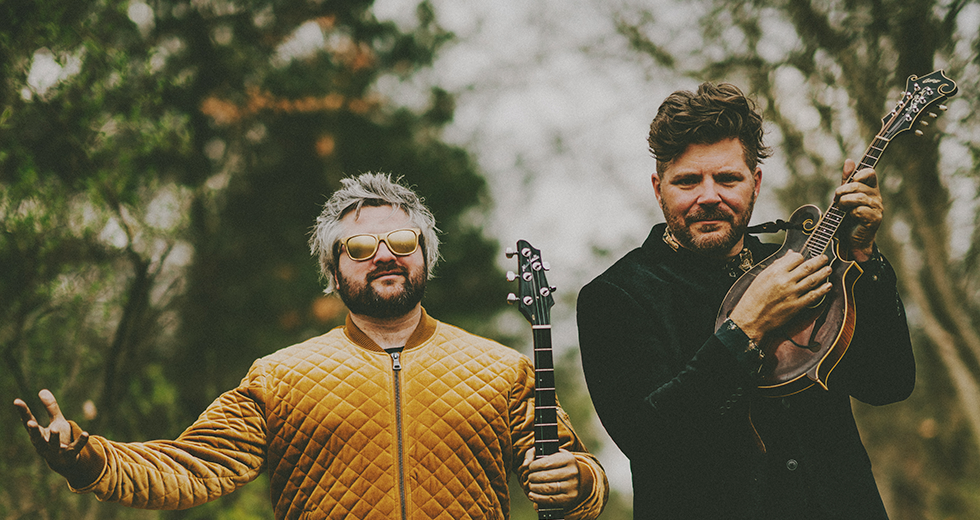 After a long, straight-through 12 hour drive from Nashville, The Golden Age was greeted by a sold out and enthusiastic audience at In Your Ear’s Studio A. The night was one of the few times the relatively new band had played before a live studio audience as they have been concentrating on producing their first album and shooting a handful of videos. The band slowly warmed up to the live studio gig and by the second set had truly hit their collective stride.

JAMinc president Tim Timberlake probably said it best: “It’s thrilling to have high expectations exceeded and that happened emphatically tonight as The Golden Age took us on a wild and riveting ride through the wonderland of Bryan Simpson’s imagination. His story-song ‘Born Lonesome’ hooked me on his band Cadillac Sky more than a decade ago, and tonight proved that he’s still one of the most compelling lyricists in any genre. Matt Menefee’s breathtaking banjo aerobatics and Geoff Saunders’ imaginative bass lines sealed the deal, with significant support from our front of house sound wizard Matthew Walsh. The decade is off to a good start at In Your Ear.”

Those sentiments were echoed by several comments from the audience who noted the band’s pure and exceptional musicianship. During the first set, Bryan talked about “being trotted out at family gatherings, when only 12, to play and entertain in the living room.” To that point, one attendee remarked, at the end of the show, that it really was like sitting in a living room watching “talented relatives” play music, have fun and just be totally entertaining.

If there was any downside to the evening it was that the band barely got to partake of the pre-show potluck buffet although Bryan did comment, “Whoever brought the garlic bread…Thank you! I only got one slice but it was really tasty.” Not to worry as the band, IYE’s owner Carlos Chaffin, Matthew and local blues player Elizabeth Wise took the band out for a late dinner in Churchill. The perfect end to an epic start for the new decade.

Check out The Golden Age’s school visit to St. Andrews and Mary Munford »

About The Golden Age

Former key players in the super group Cadillac Sky, who played our IYE series in 2009, are back in the game!

The Golden Age is Matt Menefee and Bryan Simpson’s prodigious return to the music that first inspired them: bluegrass. According to it’s spirited collaborators, The Golden Age’s M.O. is to “die trying to possess the passion and inspiration towards preservation and rebellion reflected in the truly original voices that have gone before us like Monroe, Stanley, Flatt and Scruggs, Rowan, Hartford, Osborne, Grisman, Skaggs, Bush, Rice, etc “

After having spent nearly ten years making music together with Cadillac Sky which brought them opportunities to record with rockstar/bluegrass enthusiast Dan Auerbach of The Black Keys and bluegrass legend Ricky Skaggs and tour with folk rock superstars Mumford and Sons on their initial sold out North American Tour; not to mention make 3 critically acclaimed records and a legion of die hard fans, the two tried and true friends decided the time had come to reunite.

The duo had been re-inspired to return to their roots by the rediscovery of records like “Aereo-Plain” and “Morning Bugle” by John Hartford, “Emotionalism” by The Avett Bothers and Bela Fleck’s ‘Tales from the Acoustic Planet vol.2’ ; which all possess a certain off-center authenticity and a song-centered approach lyrically and instrumentally that first fueled the genre back in its initial heyday.

Matt Menefee’s ear catching, virtuosic banjo sounds once again find a way to honor and upend the time soaked tradition with a sonic thought process all his own but this time it’s his emotional arrangements that draw every listener inside the truth-laced tales being spun by plaintive lead singer Bryan Simpson; whose colorful wordplay and whimsical lens daringly looks back and moves forward with poignancy and sincerity.

Pairing this with the joy of a musical friendship that certainly is tangible thru out the minimalistic but beautifully recorded sounds as caught by Grammy winning engineer Eddie Spear (Brandi Carlisle/Chris Stapleton), all signs point to the Golden Age being as important of a band to come along in bluegrass in a very long while.

The two artists have one goal in mind as they link arms: make music that sticks. Not just music that spikes the blood sugar. Timeless transcendence is the target. Certainly lofty heights to try and scale. But what a pleasure it will be listening to them climb.

Read more about The Golden Age »