A night of African rhythms and melodies at In Your Ear

The first thing Crocodile River Music wanted to do when they arrived in RVA was go to bed. Understandable since they had driven overnight from New England and arrived here around 7:30 AM. Our partners at The Graduate Hotel graciously welcomed them and a good rest was had by all. A good thing considering how the rest of their Wednesday was shaping up.

Mid-afternoon the band put on an inspiring set at St. Andrew’s School before heading to Studio A at In Your Ear. Greeting the band was the best message a band can see, taped to the front door, “Sold Out”, which the band loved so much they took a photo of it.

After a vegan and vegetarian heavy potluck buffet, truly as diverse as the music that was to follow, the 80 or so in attendance were musically transported to what many consider the root country of all modern music – Africa. Lead by Balafon master Balla Kouyate and Djembe master drummer Issa Coulibaly, they wove the sounds of steel drum and electric guitar with their own instruments to create a sound that was at once unique yet familiar. Guitarist Luke Okerlund often invoked a sound familiar to many in the audience – Frank Zappa and the Mothers of Invention.

The group’s percussionist and spokesman Zach Combs helped interpret the sounds and mission of the band. Dovetailing perfectly with JAMinc’s mission to bring world class music to our schools, Issa and Noah talked about the more than 260,000 students they have played before and their belief in the continued importance to keep both music and the arts in schools.

The evening ended with a first-ever (for JAMinc shows) dance party with many simply not being able to contain their need to get up and dance to the band’s rhythmic beats. To say it was a boundary expanding experience is truly an understatement. 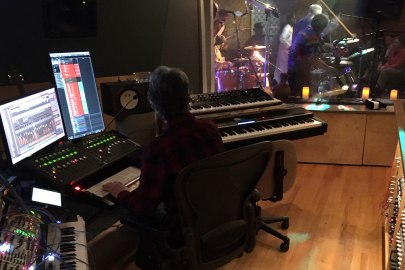 In support of Black History Month, JAMinc is proud to present an evening with Crocodile River Music on Wednesday, February 26 at In Your Ear Studios. Zach Combs, its Director, fell in love with the rich and diverse culture of West Africa while in Mali on a Watson Fellowship. Deeply inspired by his journey, Zach founded Crocodile River Music in 2011 to provide opportunities for both emerging and established artists from Africa and evoke new ways of cultural thinking.

As word about the mission of Crocodile River Music spread, requests poured in to expand into schools and community groups. In response to this demand, Crocodile River Music launched African Arts in Education, a fiscally sponsored project created to bring African music, art, and dance education directly to schools.  Featuring Mali’s balafon legend Balla Kouate, a former Richmond Folk Festival performer and currently touring with Yo-Yo Ma, Crocodile River Music promises to fill Studio A with an irresistible taste of this rich tradition.

Meet the team at crocodilerivermusic.com »

← JAMinc is excited to announce the first In Your Ear Concert of the new decade!
Stomping and clapping with The Golden Age in two Richmond area schools →